When your child is sick, you’ll do just about anything to make them better—including moving halfway across the country to get them the medicine they need. For some families being called “marijuana refugees”, it makes little sense to remain in a state where medicine is promised and not delivered. Instead, they’re moving to a state where a variety of medical marijuana can be found, without having to go on the black market and risk arrest.

According to The Star-Ledger, the Wilson family of Scotch Plains is just one example. Their young daughter suffers from a seizure disorder. The one viable solution—aside from a debilitating and hardly-helpful blend of pharmaceuticals—is a very specific strain of marijuana, sold in Colorado freely but not found in New Jersey dispensaries. 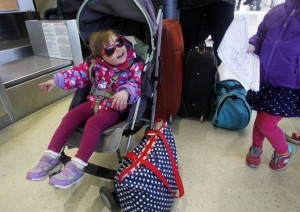 The Wilsons fought to have N.J. medical marijuana laws include children and worked to remove the hurdles in getting 2 ½-year old Vivian the medicine she needs. But even with modest legal changes, the local dispensaries aren’t producing edible products and the strain needed for her Dravet syndrome is simply nowhere to be found.

The medicine is a liquid form of concentrated cannabidiol known as Charlotte’s Web. It’s named after another child who suffered from Dravet syndrome and made a near-miraculous recovery on the liquid. Despite what critics thin, the medicine contains no psychoactive compounds and the user does not experience a “high” of any kind.

Legal obstacles that the Wilsons thought were the only things in the way of them getting Vivian her medicine have largely been removed. Those included the requirement that they receive recommendations from at least two doctors including a psychiatrist, a ban on dispensaries growing more than three strains of marijuana, and a ban on them selling cannabis in edible form.

Still, none of the only three N.J.-sanction dispensaries are selling edibles or the strain they need. So they are taking their children elsewhere.

Gov. Christie has taken a hard line on medical marijuana, signing off on it but promising to make it difficult. It seems he is sticking to his guns, as even those in need of the medication are unable to gain access under the restrictive rules being implemented.

For some patients, the alternative is going to the black market and buying marijuana as they always have—from their pot dealer. But with this option comes legal ramifications and potential criminal charges. Though leaving the state is an inconvenient option, it is preferable to spending time in jail in a state that gives medical marijuana lip service but seems to fall short of backing it up with real action.